The PIM Assert is an election process that prevents multiple senders on a broadcast media from replicating the same multicast stream on to the wire. The scenario this can happen in is somewhat specific; I've only been able to think of a way to create it using PIM dense mode. 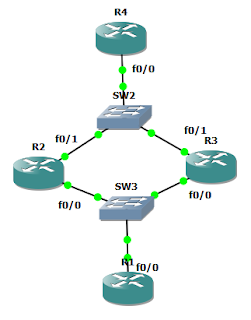 R4 is our receiver and R1 is our transmitter.  PIM dense mode is running on all interfaces except FastEthernet0/0 on R1 (R1 is not running any type of multicast routing protocol).  R4's lo0 has IGMP join-group configured for 239.1.1.1:

There's a catch here using a router to create the multicast traffic, and there's a reason I set the lab up this way. In order to trigger a PIM Assert, which we are about to see, the (S,G) has to match exactly on both packets egressing R2 and R3.  If the links between R1 and R2 and R1 and R3 were any type of point-to-point link, the traffic would be duplicated and the assert would never happen.  IOS's implementation for creating multicast traffic is to source it off every router interface and send it out every interface.  Even if you use a "ping 239.1.1.1 /source Lo0", the source part of the command is completely ignored - the packets always originate off their respective interfaces.  If you're pinging off two separate interfaces, you have two separate (S,G) entries, and the traffic is duplicated.  If you've only got one interface, pointed at a broadcast media, you end up with one (S,G), and this lab is possible.

So, going back to our Assert between R2 and R3...  R2 and R3 both send an Assert packet at one another, saying why they should be the ones sending the traffic.  The winner is decided by:
- Lowest Administrative Distance (AD) back to the source
- In a tie, best metric value
- In a tie, highest IP address

Our routers both have the same AD (Internal EIGRP, 90) and metric.  In this case, R3 is always chosen for highest IP address, which we can see in this excerpt from show ip mroute from R3:

We're clearly not going to be able fiddle with the metric or the AD back to the source in this case, as both routers have connected interfaces.  This isn't the way I originally planned this lab, but after modifying it repeatedly due to the source interface problem described above, we're going with what we've got!  So, let's play with the IP addresses and watch the magic: