I try to dig pretty hard in my blog posts.  In this case, I found out that there's a lot to NTP!  In fact, there's a lot that would be a real stretch to get in to the CCIE lab.  I feel bad about writing a "high level" post, but I also want to save both my time and my readers' time - a lot of the topics I could've dug harder on are really unlikely to be of any use, either production or lab-wise.

That said, here's a list of things I will not be covering:
- Any versions besides NTP v3.  v4 should be out-of-scope for the lab exam, as it's not supported on 12.4(15)T.
- The NTP query system.  This is normally SNMP based and there's very little information on Cisco's implementation.  It has nothing to do with syncing time.

The stratum is treated by NTP similar to a hop system in a distance vector protocol.  Stratum 1 servers should be best, stratum 2 servers are one NTP hop away from stratum 1.  The servers speaking to stratum 2s become stratum 3s, and so on and so forth.

Let's look at some easy concepts that will help lead into some more advanced topics. 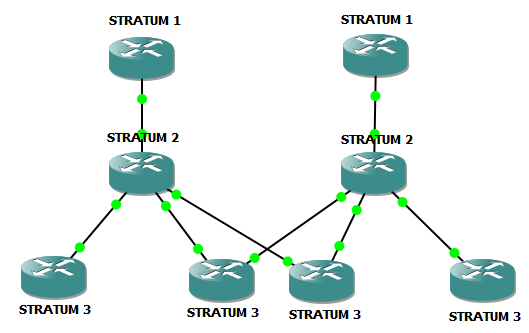 That's simple enough.  We gain a stratum the further we get from the most trusted time servers.

As an attempt at being somewhat realistic, I'm going to start another diagram at stratum 5, because a stratum 1 router should have a hyper-accurate clock attached (such as a GPS or atomic clock). 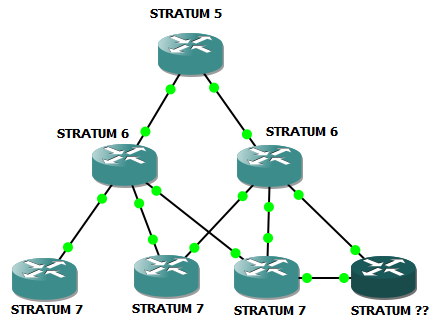 Out of the box, NTP allows anyone to receive time from it, so no more config is required on our stratum 5 device.

The next row down, on stratum 6:

Now we'll work at the bottom row, on the "stratum ??" device:

So what stratum would we be?  It's probably relatively easy to figure out that we'll still end up stratum 6, as it naturally prefers the "better" time from the stratum 5 router.  Better is determined by the stratum hop-count.

What if we did this?:

Still stratum 6!  Why not 7?  Because prefer, contrary to what some other documentation indicates, doesn't actually statically prefer that host.  If two systems had the same stratum, prefer does function, but not for two separate stratums.

Now let's take a look at the ntp peer command.  The premise isn't that hard, it means sync time from that router, but also accept time from it.  Wait a minute!  How do we determine who has the right time in that case?

It's stratum-based, of course!  But wait, why not just make the router with the better time the server.  Well, that's great until a network failure occurs.... 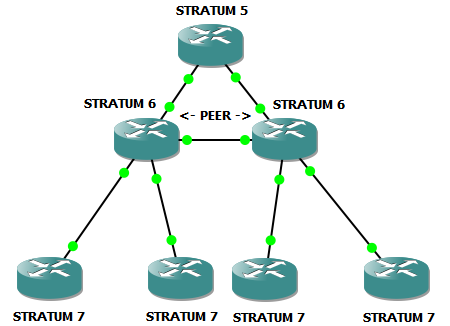 ntp peer to the rescue!  By telling the two stratum 6 routers to peer off each other, they can both act as either a client or a server at the same time.  The router experiencing the failure would have lost its link to stratum 5, and would accept the stratum 6 as it's master, on the fly.  If either the left or right link failed, the other could fill in as its server.  When the failed link comes back up, the router would automatically reconverge to the better stratum master.

Now that that's all explained, let's swap to a simpler topology, using physical gear, to look at the CLI output.  We'll have three routers, R1, R2, and R3.  They all have layer 3 reachability to each other.

There's a lot of information on this command, but I've highlighted the important parts.  We can see who we're peered with, whether the peering is "sane" and "valid", and what the stratum is of our neighbor (note the "neighbor's" value of stratum 4, although we configured master 5!).

Now let's setup R2 to poll off this device.

Oh, the first time I configured NTP, how I came to hate you, "insane, invalid" error message!

This output is very common for NTP, and can be broken down easily if you disregard most of the message.

offset = This is the time difference in milliseconds between our local clock and the ntp server's reference clock.
insane, invalid = I'm sure this has more meaning, but in short, this basically says look at the offset value.  The offset must be < 1000 msec (1 second) off in order for the insane, invalid error to go away.

The problem is, after NTP kicks in, it doesn't just shift the clock instantaneously.  It slowly drifts towards it.  If your router is stuck in 1993 and you're trying to shift to 2013, this will take a long time. You can speed it up by manually adjusting the clock closer:

After you're < 1 second off, the router will adjust its stratum from 16 to the appropriate stratum (in our case, 6).

R3#show ntp status | i Clock
Clock is synchronized, stratum 7, reference is 2.2.2.2
Again, any router that's > stratum 16 is automatically happy to be an NTP server.

Let's look at some random features before moving on to authentication & access control.

NTP updates are always sent in UTC/GMT; time zone information is adapted to the local time with:
clock timezone PST +7

If your router has a hardware clock, you can use NTP to synchronize to it:
ntp update-calendar

Disable NTP from answering on a per-interface basis?
ntp disable

It can be a bad idea to have a promiscuous NTP process.  While I haven't found any flaws that would cause significant damage to the router directly, attacking NTP can be used as a way to obscure what really happened during another attack.  Logs rely heavily on the time being right so that they can be correlated against specific events; if an attacker managed to skew all your logging times it could make it far more difficult to track down what happened.

So how exactly could NTP be abused?

Yes, it's just that easy to hijack NTP. Note I don't reference 3.3.3.3 anywhere in R2's config.  R3 simply announced itself as a peer with a better stratum and it wins.

You'd use either access controls or authentication to fix this.

The other potential "hack" is to impersonate a valid NTP server.  Let's say the clients already have access controls to prevent a new NTP server from taking over as shown above.  An impersonation might be from a rogue server posing as having the same IP address as the legitimate NTP server. If it gets polled for time instead, or worse yet, it announced time via broadcast or multicast (discussed later), then its time may be assumed as the correct time.  This can be fixed with authentication.

Let's look at access controls first.  These have a funny order-of-operations and can be confusing.

So here's the funny rules.
1) Rules are matched in the order shown above: peer, query-only, serve, serve-only.
2) Once you've put an access-list with an implicit deny in place, there's an implicit deny for all the other mechanisms.  So you need to permit everything you want after that point.

Let's walk through some examples.

On R3, note that we specify a loopback address as source.  This is best practice when you're restricting access on the server, as NTP clients will automatically source their packets from the nearest interface.  If you lose an interface, you may lose your time, because it's a fair bet you only permitted the closest interface in your access list on your NTP server.

And, predictably, it doesn't work.  We restricted peering in the first example, which also restricted every other type of communication automatically.  As mentioned above, you get an implicit deny as soon as you add an access list.

Well, that didn't work, but it should have.  We expected to have the peer access-list take priority over the serve-only.  Let's examine R2:

There's not a whole lot of harm of giving time to someone, so there's no need for the server to authenticate the client -- if you want to control that, then use access groups.  However, the client needs to know they're not talking to a fake server, and that's where authentication comes in.

The server-side configuration is rather light:

R2(config)#ntp authentication-key 1 md5 CISCO
(note, some newer versions of IOS, including ones potentially used on the lab exam, require "ntp trusted-key <key number>" on the server as well)

The client side configuration:

The trusted-key command allows you to trust a variety of keys instead of just one.  You could, for example, trust keys 1-3 if you had keys 1, 2, & 3 defined.

Of important note, this doesn't in any fashion force authentication for the other clients.  Other NTP clients will still be able to request time without authentication..

And last, let's look at broadcast and multicast NTP.  We're going to have R2 broadcast time to R3 on a serial link connecting them.

Not shown here, I removed the static configuration on R3 that was referencing R2.

We'll also keep authenticating the packets.  This is particularly important with broadcast or multicast NTP deployments.

Note the dynamic peering this time.

To be fair, it wasn't quite as easy as I show above.  What looks like an IOS bug had R3 remembering that R2 was a configured peer, and it wasn't happy about getting broadcasts from it.  I found that with these commands:

After doing a "no ntp" and re-entering just the vital commands, it was happy again.

I'm not going to do a thorough write-up of multicast basics here, so the multicast configuration is very similar to the broadcast:

There's a potential gotcha on multicast NTP - the default TTL, at least on 12.4T, is 1.  That means it's basically only valid for that segment.  You can't multicast route it without changing the TTL: