I didn't find these updates on any Cisco or 3rd party list, but when writing my original NTP and Netflow blogs in mid-2013, I mentioned out-of-scope topics when writing them, because they weren't supported on IOS v12.4(15)T. Now that v5 is out, all those topics are back in-scope, so I decided to blog them.

Here are the original articles this one builds off of:

Netflow
First, I wanted to mention an omission from my original blog. At that time I didn't have a collector that would support Flexible Netflow, so I evaluated FNF via Wireshark. That was fairly effective except I was missing a major element of netflow: the bytes transferred! I'm now using a collector that supports FNF, and I immediately noticed I wasn't graphing any traffic.

This is a simple, working FNF config. Matching or collecting counter bytes and counter packets should be done to make Netflow do what you're used to it doing -- measuring traffic.

What's the advantage of integrating NBAR with Netflow?
By default, Netflow only exports very high-level protocol information. Integrating NBAR gives very specific/granular protocol output to the collector. Note, your collector needs to specifically support this, this is not a small change from the protocol level.

If you're familiar with how the template is sent out for FNF every so often, the NBAR table is very similar. IOS will send out a rather large (many packets) template defining the NBAR Application to ID at specified intervals, then those IDs are sent with the Netflow packet to define what the protocol is.

There are several other blogs out there that give big, complex templates for integrating NBAR with Netflow. I took a few of these as a base and worked backwards to the real requirements. This is not a hard thing to enable. Your flow record must contain collect application name (or match application name), and optionally you can tune the frequency of the NBAR FNF template being sent out with option application-table timeout in the exporter.

Netflow was recently made an open standard with v10. The open version is called IPFIX. To enable IPFIX output instead of FNF v9, you would:

Note I haven't tested this beyond checking it in Wireshark, because I still don't have a collector that speaks IPFIX. 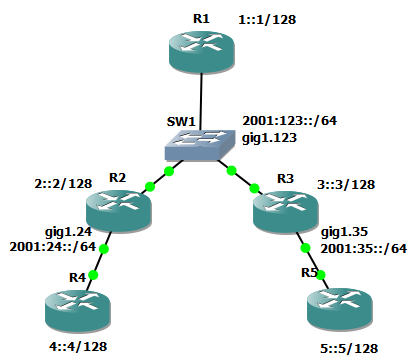 The big difference on NTP v4 is IPv6 support. There's really not much to cover on the basics... clearly broadcast NTP is gone, but Multicast NTP still works the same general way it did in v4.

It would translate the hostname to an IP address and the IP address would be saved in the config, not a good thing if the server changes IPs.

Let's take a look at the multicast option. As IPv6 multicast has blessedly been removed from the v5 blueprint, I'm going to cheap out and perform non-routed/same-link multicast.

Maxdistance, for me, is very confusing. It appears to be a trust value. It's normally modified in NTPv4 in order to speed up convergence. As I understand it, the higher the value the faster the synchronization will happen, because the upstream time will be trusted sooner. The algorithm appears to combine half the value of the root delay and the dispersion, and if that value is lower than Maxdistance, then it's OK to consider yourself in-sync. My labbing did not produce exactly that outcome but it was extremely hard to say for sure because my NTPv4 convergences very quickly. Because you basically have to be a time expert to understand what this does, I would hope the CCIE lab would be limited to two types of questions on it:
1) Set it to some value they provide
2) Set it to "slowest" convergence (1) or "fastest" convergence (16)

It does just what it says - if my peer or configured master's clock is more than 1,000 seconds off of my clock, reject the update and syslog:

NTP Orphan is really cool. It seems like an obvious feature now that I've seen it, but I can imagine this is a huge help for smaller organizations that rely heavily on NTP.

Let's say, from our diagram, R1 is an Internet time server that our fictional organization uses as its sole NTP master. R2 and R3 are edge routers inside the company, and R4 and R5 will represent servers querying R2 and R3.

At this point every device has the up-to-date time.

and obviously R4 and R5 share the same fate.

What if we could program R2 and R3 to take their best stab at what the time should still be - mind you we're talking about being only a couple minutes since last sync, so the time is probably still very close to accurate - and then temporarily and seamlessly take over the NTP Master role if they lose valid clock from R1?

This is exactly what NTP Orphan does.

The config is extremely complicated:

(I was joking about the complicated part)

Really, that's it.  Let's understand what's happening here now.  Orphan kicks in when we lose sync with our server. The number 6 here is a stratum number, and must be a number lower than your real upstream NTP server - otherwise the failover/fail-back mechanism won't work right.

Best practices indicate configuring the same Orphan stratum on all devices you're running Orphan on, then peering all the Orphans to one another so that only one is "elected" to be the temporary Orphan master.

We see R2 is now stratum 6, synchronized with it's own virtual Orphan server.

R3 is synchronized with R2 as its Master.

R4 is synchronized with R2 as its master.

R5 is synchronized with R5 as its master.

Now the most important feature of this is fail-back, let's re-activate R1.

It automatically shut down its Orphan process when it synced to the superior stratum 4.