Automatic v6 over v4 tunnels: ISATAP vs 6to4 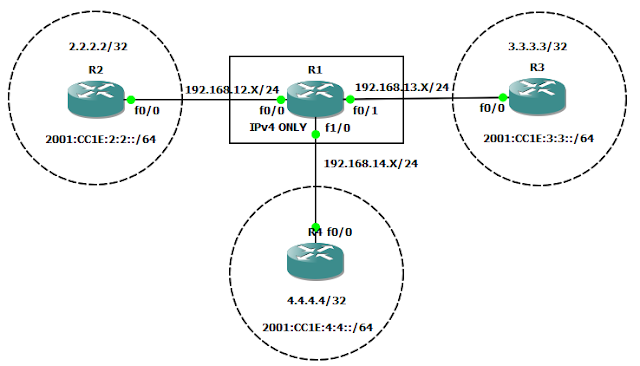 The square represents an IPv4-only service provider, and the circles are IPv6 islands.  The goal is to have any-to-any IPv6 connectivity between the circles, via the IPv4 only-network.

All relevant IP addresses are on the diagram.  IPv4 routing is being accomplished via EIGRP.  The IPv4 network has any-to-any connectivity in place already.

The configuration is actually rather easy.  In fact, the initial part of it is the same on all three devices:

The IPv6 network address I chose was completely arbitrary.  The eui-64 is deliberate.  This should look a little funny to you, because eui-64 is an Ethernet option.  No Ethernet here...

ISATAP works as an NBMA network - packets are "tunneled", packet-by-packet, towards their destination, which is selected by manipulating those last 32 bits. Contrary to what I originally thought, dynamic routing protocols can be run over ISATAP.  For example, OSPFv3 can be run by using NBMA mode and neighbor statements to the link-local addresses.  If using static routing, you must specify the IPv6 next-hop with every static route.  Otherwise the ISATAP tunnel has no idea which gateway your internal addresses are behind.

(In my case, the "internal" IPv6 network on the diagram is represented by Lo100 on each device.)

A quick ping from R4 to R2 will verify connectivity:

I've erased all the ISATAP configuration, and changed the inside IPv6 addresses.  Here's the new diagram: 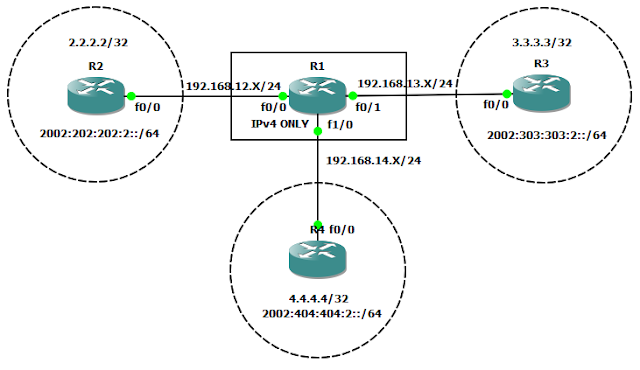 The configuration is actually quite similar to ISATAP:

I'm sure you already see the identifying IPv4 factor here:  The IPv4 loopback address is once again embedded in the IPv6 address.  In R2's case, 2002:202:202:1::2/64.  The :1 directly thereafter is an arbitrary number I used for clarity which will be explained in a moment.

I'm sure you also noticed the ipv6 static route on each router.  This is what makes 6to4 so cool.  Rather than having to add a static route to your inside networks, if you IPed them correctly (make note that I changed my inside IPs for this exercise), you can dynamically route to them.

When the packet is received by the neighboring 6to4 router, it looks past 2002:XXXX:YYYY and figures out which interface the packet belongs to, dynamically.  If your inside IP addresses are 2002:XXXX:YYYY:A::X, then you get a simplistic form of dynamic routing.

On that note, let's test this thing out:

We have a winner!